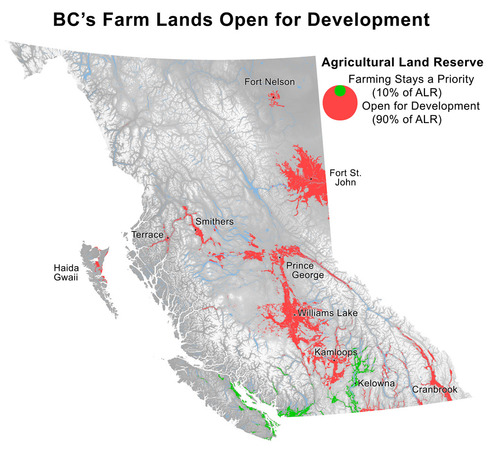 British Columbia contains relatively little farmland due to its terrain and climate; less than 5% of BC is good for growing food. 40 years ago the Agricultural Land Reserve (or ALR) was established to protect food-producing lands that boast good soils. Our population has more than doubled since then, and even with the ALR, BC is already unable to feed itself. The current ALR is critical to our future food security. Its boundaries should be expanded, if anything, not radically reduced.

The BC Government is about to pass a bill – Bill 24 – that will allow industrial development through the vast proportion of that farmland. That development would include fracking, mining, diversion of water for oil and gas, and other invasive industrial activities.

We must stop Bill 24 from becoming law.

The BC Liberals say the changes they are making are designed to make things easier for farmers. As Harold Steves, one of the earliest proponents of the ALR (and himself a farmer) said last week, “farmers have ample opportunities for value added uses on farms and ranches already. These changes are designed to make industrial development easier. Flooding the Peace River for the Site C Dam can now be considered an acceptable non-farm use. So can fracking, and other benefits to the oil and gas industry. Our food supply from California is drying up with the drought and our government is prepared to sacrifice the farmland needed to feed our future population. The government has set the stage for a real fight, a fight that will determine the future of BC farmland.”

WHAT CAN YOU DO?

1. GO TO BC Food Systems Network for info and actions

4. PLEASE send the following short email to Premier Christy Clark at premier@gov.bc.ca and also cc: steve.thomson.mla@leg.bc.ca, bill.bennett.mla@leg.bc.ca, commonsbc@gmail.com, and also your MLA (find that email here). Just cut and paste the below into your email:

I am deeply opposed to Bill 24. I ask that your government not pass that bill.

The ALR is one of the best, most historic pieces of legislation in BC’s history and must not be dismantled. BC’s food security depends up on it. Industrial activities like fracking and others are not compatible in any way with food production.

On behalf of the people of British Columbia, I urge you and your government to defeat Bill 24.